If I was to put the way I'd like to race a triathlon into a musical context, it would probably be Led Zeppelin's When The Levee Breaks. Right from the start, it's powerful and features a driving tempo which is relentless, right until the very end.

Right now, my races are probably more like a John Williams 1980's Olympic theme song. Starting off slowly and quietly, building in the middle, before reaching a frenzied crescendo, although I must admit, my crescendos are not quite as soul stirring as those of the man known for his movie scores such as Star Wars and Indiana Jones. 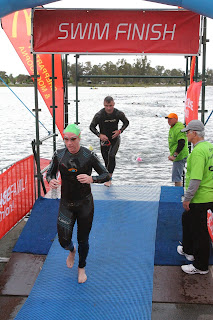 Challenge Shepparton was my first foray into the world of "half-distance" racing and very much fell in line with said Williams motif.

Andante (the musical term for moderately slow) - The swim took place in Victoria Park Lake, one of the prettier parts of Shepparton. The water colour may have resembled a short black that your local barista  serves up most mornings but, lets face it, you're not there on a marine biologists field trip. An overcast morning meant it was easy to sight the gigantic red and white cube-shaped buoys throughout the M-shaped course.

Like a solo brass introduction to a Williams classic, I had began. Understated, mostly solo and possibly underwhelming, the song was underway.

I felt I swam as well as I could on the day, in a discipline that I'm working hard at and slowly progressing with. I exited the drink 38th of 55 in my age group. Definitely an area that I can improve in, and that I need to.

Moderato (The musical term meaning at a moderate speed ) - The bike was a two lap out and back affair on very flat terrain, however the conditions made it a tough gig. 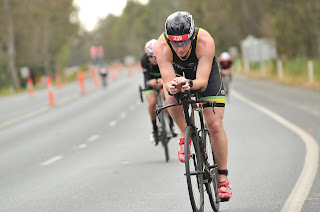 This is the part where Williams introduces a little bit of bass and accompanying strings to the piece. Nothing over the top, just a little fuller sounding.

Strong cross winds and a fair amount of rain made for a testing experience. Thankfully we often encounter similar winds in Wollongong so it was far from uncharted territory.

Being my first race over the distance, I was conscious of not over doing it on the bike, particularly with the run being my strongest leg.

My two laps were reasonably consistent, I'd got my nutrition right and was feeling pretty good. My time of 2:50:13 is certainly something that I can improve on. The bike is a work in progress and always coming along.

Something I may not have been prepared for was transition. I entered T2 incident free and realised that the combination of rain, wind and 12 degree temperatures had left me numb. I grabbed my helmet strap but couldn't feel a thing, it was more a case of remembering what to do rather than feeling it that eventually allowed me to get it off. Putting socks and shoes on presented a similar conundrum yet, soon enough, I was on my way. 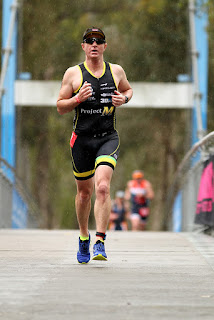 Allegro (The musical term meaning moderately fast) - Having only ran one half-marathon before, which wasn't off a bike, I'd only estimated a rough pace that I may like to run. The plan was more a case of finding a rhythm, which I did.

Slowly I felt better and better, as though Williams had commanded the military style snare drum and dramatic cymbals to join in for a glorious climactic curtain call.

I thought I may even have enough in the tank to push home with a little more vim over the final 3km, yet when I reached that stage, it was as though my right hamstring held a picket line with some tense negotiations.

To paint the scene, this was what I got back after I'd asked for a little bit more, just for 3km.

Hamstring: "Yeah I can see what you're trying to do, but I've been at it for five hours, how about we just agree to keep it at this pace, if not I'll cramp, your call buddy."

And with that, I continued as best I could to the line, wondering if Williams had ever met similar resistance from an orchestra member. 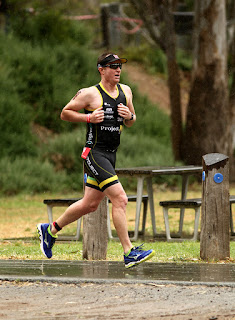 My run split was 1:43:57, only six minutes slower than my non-triathlon effort over same distance. I'd taken 5:18:25 to traverse the full race and finished 26th in my age group.

There was plenty to take away from the race and lots to improve on. The Shepparton course is a gem to race on and one that I'd recommend.

For now, it's back to shorter course racing with the view to the possibility of another half-distance race at the back end of the season. Until then it'll be a lot of hard work and hopefully a little more Led Zeppelin and a little less John Williams.

A massive congratulations goes to my coach Nathan Miller who finished top ten at his pro debut, along with Carolyn Dews who won her age group and Matt Lewis who finished second in his.

Nepean Triathlon is Australia’s oldest. In 2016 the race celebrated its 35th anniversary, it was my second appearance at the same venue.

The race marked exactly one year since I had decided it was time to get a coach and, thus, had been under the tutelage of Nathan Miller. I thought it would be a perfect reference point of any gains I might have made in that time.

I tuned up for the event a week earlier with a spin around at the local Illawarra Triathlon Club race. This was done on tired legs after a long ride and run combination the day before.

It was a brisk morning with temperatures hovering close to single digits; thankfully the water was slightly warmer. The swim was a wetsuit affair and I set off in the tenth wave, what seemed an eternity after the pro’s had left.

I felt good during the swim, with a lot of miles in the arms I churned through the 1km with minimal interference and managed to find a few sets of feet along the way.

I was a little shocked at how slow the time had been but, in hindsight, I was about where I expected to be in the field and the time was more a reflection of conditions on the day.

The swim isn’t my strong point so I was keen to press on during the bike and run. I was in and out of T1 as quickly as possible. The results show that I made up 11 places there alone.

The 30km out-and-back ride presented a bit of a challenge, but only for half of the ride. A solid wind had whipped up, thankfully it was a tailwind on the way out and had me feeling like Sir Bradley Wiggins, whizzing past earlier waves with a minimum of fuss.

Then I reached the turnaround.

The breeze slapped you in the face like a disgruntled wife after you’ve rocked up home at 4am after just going down the pub for one beer. The figure of Bradley Wiggins was quickly replaced by a 4yo trying to ride up Bulli Pass.

I focused on staying aero and keeping the power on and still steadily made progress through the field. I jumped off the bike with a time three minutes faster than a year earlier and I had made up a further nine places.

I couldn’t wait to get onto the run, easily my favourite leg. That in itself was an indication of how things had changed in a year, 12-months earlier I was dreading it.

I immediately found a good rhythm and a comfortable heart rate, that happy medium between not having a go and completely blowing up. I was happy when I saw the pace that I was running and did all that I could to hold it for 10km.

I crossed the line with the third best 10km I have ran and easily my best off a bike. I’d made up another nine placed to finish 21st of 97 in my age-group. A year earlier I had finished 62nd and gone eight minutes slower.

One of the big take-aways for me is that consistency and hard work, along with a good program and advice, will give you great scope for improvement.

There is still a long way to go but I am very happy with how far I have come.